Warning: count(): Parameter must be an array or an object that implements Countable in /home/greengut/public_html/wp-content/themes/karma/framework/truethemes/metabox/init.php on line 757
 Recipe: Cheesy Quinoa Bowl with Chickpeas & Broccoli Rabe | GreenGut Wellness

One of the greatest things I discovered when I went vegan was the concept of “the bowl.”  It’s one of those ideas that’s simple and pure genius at the same time.  When you’re craving a filling meal that doesn’t require a lot of rigamarole, it’s the perfect way to satisfy your hunger.  And it’s so versatile!  The basic idea of “grain, bean, green and sauce” can be combined in so many different ways that I’m rather astonished that no one’s written a whole cookbook of bowl recipes yet.  (Though a lot of cookbooks have bowl recipes in them.  Isa goes on at length about how cool bowls are in Appetite for Reduction.)

Bafflement aside, “the bowl” has become my traditional meal on what’s politely referred to in the QV house as “meat night.”  Usually occurring on Saturday, it’s the one night a week that my omni family still eats a meat-centered dinner.  That leaves me to whip up something just for me, which lately has meant trying out existing bowl recipes or inventing my own. 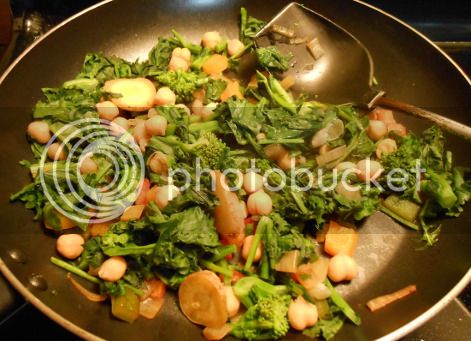 This weekend, I took advantage of the huge bunch of broccoli rabe in the fridge to come up with something new.  Filled to the brim with quinoa, chickpea and veggie goodness, this bowl takes a little more prep than some other recipes, but I assure you it’s worth the time.  Using broccoli rabe instead of kale as the green gives it a unique flavor that blends well with the rest of the ingredients.

Did I mention it’s drenched in vegan cheese sauce?  I used the Cheddar Cheesy Sauce from The Happy Herbivore Cookbook, though any vegan cheese sauce would do as long as its not too spicy.  The goal is a velvety bowl of vegan cheesy goodness with the bite of broccoli rabe coming through in every forkful.